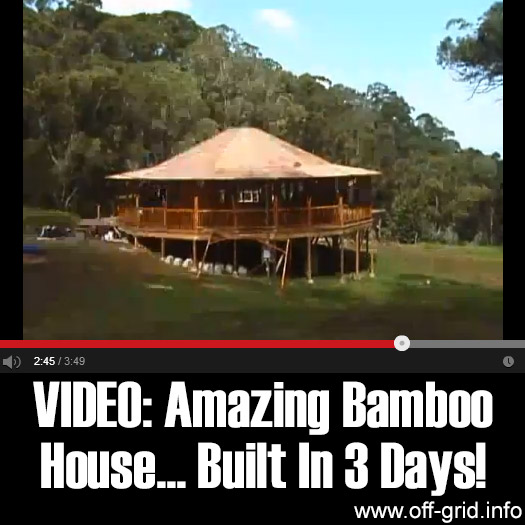 Many people who live in Asia have been using bamboo to build their houses since ancient times. Bamboo is a very versatile plant. They’re not only used as building materials, they are also a source of food (more on that later). This video by robertbamtech shows us how a fantastic bamboo house was built in just three days. Compare that with the time (and expense!) needed for a standard western home.

Bamboo is one of the fastest-growing plants in the world. It’s a type of flowering perennial evergreen plant in the grass family and is mostly found in Asian countries (but can also be found in other parts of the world). These plants important both culturally and economically in South, East and Southeast Asia.

Bamboo is a “natural composite” material. It has an extremely high strength-to-weight ratio and grows straight, which makes it very useful for structures. Many Asian countries use it for scaffolding whenever buildings are being built. It’s also used as a makeshift bridge to help people cross streams. To build the walls for houses, the bamboo is cut in half and then they are lined up and woven together to create a stronger structure.

In the video, the house was first built in Vietnam, and then it was disassembled and then reassembled again once it reached Maui.

Did you know that the hollow structure of the bamboo can also be used to cook food. Many native people fill it with rice and some kind of meat and then cooked over hot coals. It adds a special kind of flavor to a dish. Bamboo is also a popular material for kitchenware.

Bamboo shoots are also very edible. They are quite nutritious and are low in calories. Bamboo is high in fiber and it’s also an excellent source of potassium. It is also known to be a great source of phytochemicals, including substances that may possibly fight cancer, bacteria, fungi and viruses. (Source: http://inspiyr.com/4-health-benefits-of-bamboo/2/ )

Okay, here is the video:

17 Of The World’s Most Breathtaking Treehouses

Simple And Sustainable Living In My 100 Square Foot Tiny House