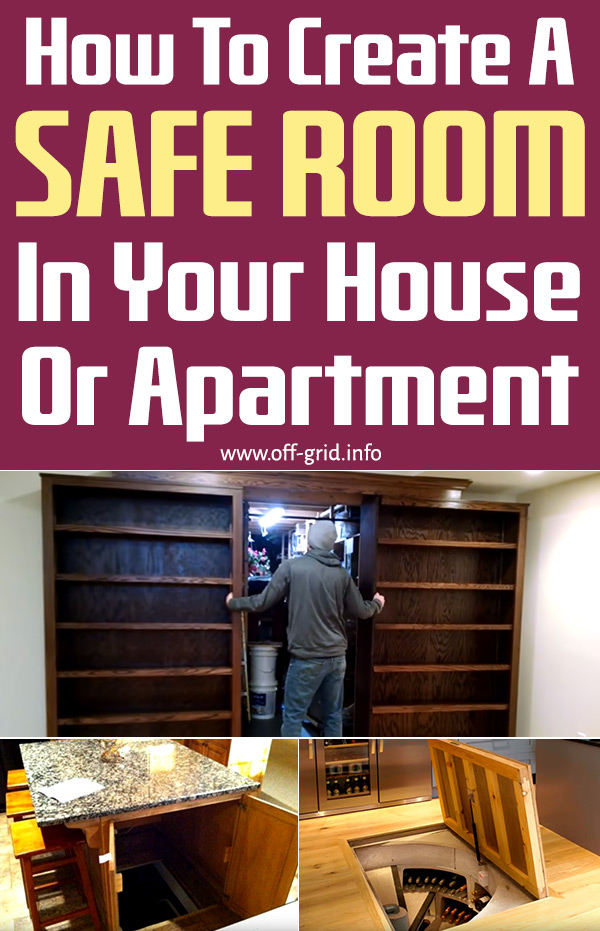 How To Create A Safe Room aka Panic Room In Your House Or Apartment – Graphic © off-grid.info. Images: https://www.youtube.com/watch?v=mpqtq0OVcS0

The concept of multi-layered security is not at all new. In the old days, a castle often had three or more layers of defense. Castle security had to be good, because it was life or death, there were no telephones and there wasn’t necessarily anyone coming to save you. We can learn much about security from castles and there are many techniques that still have value.

First an elevated position was typically chosen and / or augmented by earthworks. A steep bank leading up to the walls would make attacking the walls physically exhausting and difficult…

Then the outer “curtain wall” protected an inner courtyard…

And finally at the heart of the castle was the keep – a maximum security inner building with extremely thick stone walls (up to 24 feet thick; enough to contain small rooms fully inside the walls!) and heavy oak doors that were reinforced with forged steel bands.

The early keep was often square but became more elaborate as time went on. Some later keeps had a “three rooms by three” design – for example Warkworth Castle (1370), which had a thick-walled tower room at the center of the keep – not adjacent to any of the exterior walls: 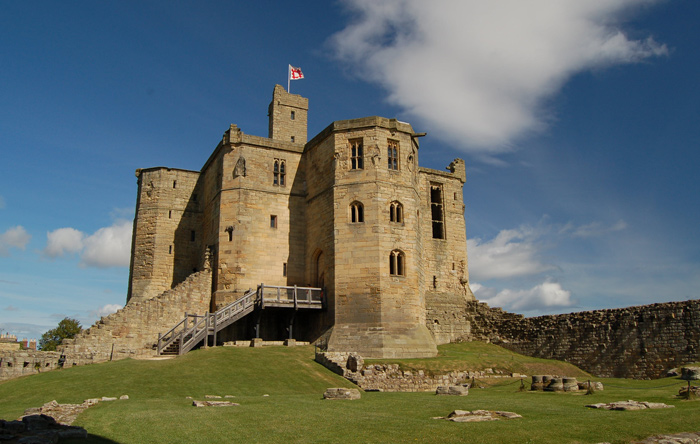 Warkworth also had further clever features – such as no ground floor entrance – which became widely adopted: A first floor entrance was approached only by easily-defended narrow wooden stairs at a 90º angle, preventing the easy use of a battering ram on the door. 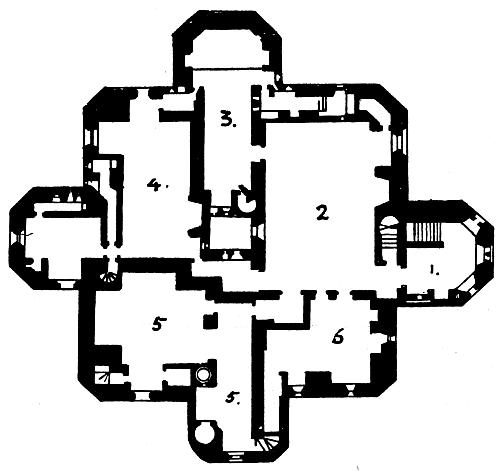 You can see from the plan view that the outer rooms protect a central strongroom / tower – which was the “highest security room” in the entire castle – with no exterior windows, robust walls and very likely also an escape tunnel as a last resort if all defenses were breached.

It’s a perfect early example of a safe room!

The Château de Pierrefonds (France) is another interesting example. A much more elaborate design, but you can see again the “strong room” at the upper center of the keep, surrounded by other rooms – which would likely have been the bedroom of the Lord / Baron / family. Note the secret escape passage through the wall the the tower (top left!) 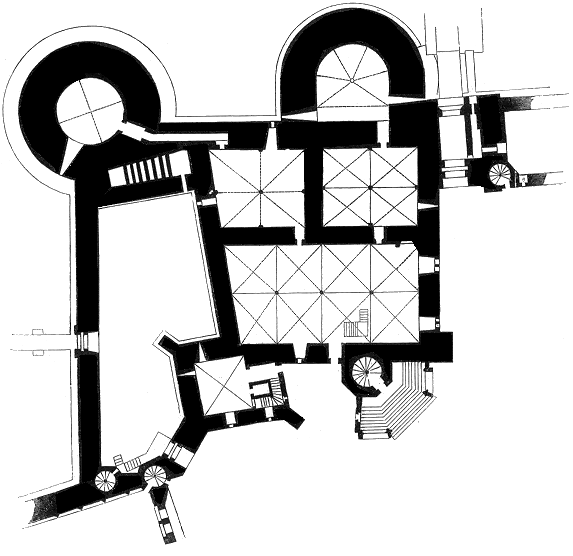 I’m imagining that the escape passage would have been secured by robust doors – perhaps more than one – which would have been very time consuming to breach, giving much protection.

This all sounds wonderfully secure, but it didn’t last: By the mid 1400’s, extraordinary “bombard” cannons of colossal size and power had been developed, that could literally smash any stone building to pieces. One cannon, named the Basilic, was able to fire a 1,200 pound stone ball – and wrought devastation on the walls of Constantinople in the famous siege. Another, the Dardanelles Gun, developed in 1464, could fire 600-pound stone balls (up to 24.8 inches in diameter) around a mile!

After this massive escalation in firepower, the highly reinforced “chateau fort” style of medieval castle building faded away, as there was no longer any point: There was no stone building that could withstand the onslaught of the bombard. No matter how thick the walls, these cannons would pound them relentlessly until they were obliterated.

However the concept of the hardened central room still stands and is one of the ultimate forms of security that is viable in “all times other than military conflict”.

I cover the topic of home defense during warfare in depth in my book Ultimate Home Defense.

In modern times, luxury homes and other secure buildings have seen a fascinating revival of some of the elements of this type of security: The safe room, also known as the panic room.

The primary purpose of the panic room is to buy time – typically in case of a home invasion or other armed attack – until help arrives. Once a security breach has been observed, the family heads to the panic room asap. They call emergency services… and then they wait. The panic room needs to be able to “resist whatever” until the cops / security forces arrive. That means, generally speaking, both firearms and hardened power tools.

The modern custom-made safe room, typically at the center of the property, is made to be bulletproof and highly resistant to various other forms of attack. It also will have an uninterruptible power supply and communication systems, functioning as a command center. It may be the room where the owners keep the safe, as well as being the room in which you feel safe…

There are now professional firms that build / retrofit panic rooms to order, typically making them from reinforced steel. These may also have kevlar / fiberglass composite panels to provide greater security against firearms. It’s also possible to purchase reinforced panels and blast-proof doors in order to beef up a designated central room. An example of one such company is Fortified Estate, who also provide high-end ballistic windows and high security doors. Panic room doors with the very highest security ratings (level 8 rifle and Forced Entry SD-STD-01.01G may cost $8,000 to $20,000. Tons of valuable info on their website.

While custom safe rooms can have a serious price tag, there is much you can do to harden a room yourself. You can designate one of the rooms in your house a safe room and “beef it up”, while retaining its original function – so that you don’t have to “sacrifice a room”!

3: The door. The first and most important retrofit is going to be putting in a high security door. Ideally choose one that looks like the other doors in the house. If that’s too costly; just do what you can: Panels of various materials (steel, bulletproof panel) can be added on the inside of the door and additional deadbolts & jamb reinforcement fitted to create a door that cannot easily be kicked in.

4: Comms. The next step is going to be fitting some communications tech. Even a simple portable backup power supply and a mobile phone charging cord will be a valuable addition, giving you a reliable way to power a mobile phone and make sure you aren’t trapped without comms. Installing a phone line and having a permanent phone in the designated room is a useful step. And don’t forget a radio to keep in touch with local and national events.

5: Surveillance. A security camera system is very valuable so that you can see what’s going on outside. If possible, tie into the home’s security so that you can monitor the exterior conditions and access your security controls from within the safe room.

6: Supplies. A first aid kit and some simple survival supplies are valuable additions. Be sure to have a supply of potable water and some non-perishable foods on hand. You might even choose to designate the safe room as the room where your overall survival supplies are kept – plus whatever self-defense weapons are legal in your region.

7: Maintain The Element Of Surprise. It’s best if nobody knows it exists aside from the people who need to know. If the bad guys kick your front door in, they are probably not expecting a hard target. They are expecting a weak, scared, helpless family. In other words, they probably won’t be tooled up to breach a high security inner room. They might be able to make off with some “low-hanging fruit” but you can buy yourself time and safety until the law arrives, by which time your raiders will want to be long gone.

Best of all is a safe room that is undetectable and they literally cannot find. Then, if they do happen to find it, they cannot breach it.

Here’s a video with a ton of ideas for creating a secret room:

A Safe Room Disadvantage To Be Aware Of At All Times:

A safe room is a fantastic security solution in times where the “rule of law” applies – however its prime drawback is that in a “lawless zone” situation where help isn’t on the way, you would be a “sitting duck” and trapped, unable to escape (unless you have a secret escape route).

Amazing Secret Passages – Made To Order!

The 10 Layers of Home Defense