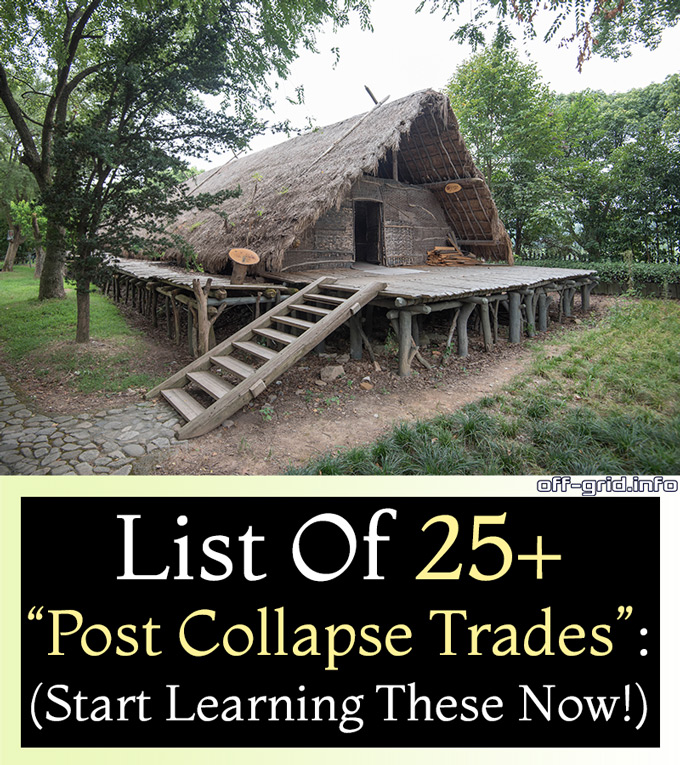 A post collapse trade is a means of pursuing a livelihood that continues to have value after either economic collapse or some other tumultuous events. Post collapse trades tend to be hands-on, relevant to survival needs in some way, and directly connected to the use of natural resources or recycled / found materials.

While many have the idea that survivalism involves having a huge stockpile of gold, guns and cash, I take the view that in many situations a better investment would be skills and knowledge.

Wealth is not necessarily the greatest of survival assets. It can make you a target; and the more you have, the more difficult it will be to defend it. One only needs to look at the history of great fortunes to know that this is absolutely and always true. Wealth brings danger and not only would thieves rather plunder a loaded galleon than an empty vessel, but the more wealth you have, the more likely someone will consider taking what you have – by foul means.

On the other hand, a doctor is going to be regarded as more valuable alive than dead. Someone who is a needed asset to the community will have people fight to keep them alive, rather than plotting ways to be rid of them!

Dick Proenekke, who went alone to live in the Alaskan wilderness, took with him a small bag of tools. These were simple iron tools, nothing powered. Traveling light, he only packed the tool heads and made his own wooden handles after he arrived. He was able to build his own log cabin using just what he had brought with him in his backpack. No truck to run out of gas. No electrical tools that might have a five year lifespan at best, cannot afford to get wet and once a component fails, they are useless pieces of scrap.

His tools would last a lifetime.

The most important things he took with him were his skills and knowledge.

Imagine how valuable a person like this would be in a small survival community.

Talk of post-collapse trades tends to consider only simple skills – such as medicine, woodwork, toolsmithing, and other basics of survival. Spurred on by sayings such as “I know not with what World War 3 will be fought, but World War 4 will be fought with sticks and stones – this “dramatized” form of survivalism assumes that we will be forced to return to making things from sticks and mud.

However the “collapse” – even if it happens – does not mean that technology will go away. It is far more likely, as we are seeing, that it will not be evenly distributed. Let’s look at both high and low tech.

High Tech: If you have high tech skills, especially of the advanced kind, your services will likely still be in demand. Even in a catastrophic collapse, technology is not going to disappear overnight. However the supply chain may break. It’s logical that many people who are now heavily reliant on technology (most of us!) will need services and supplies in order to keep that technology going as best as possible.

Low Tech: Despite the sense that “everything is getting high tech” – the demand for “low tech” (simple technologies) will continue – and post-collapse, there will be huge opportunities for “low techs”. The majority of people are not “high tech”. Look around you and you can see that this is true. Your grandparents, or parents if you are older, will never be high tech. Many of them don’t even want to be. And the “average” person (although I don’t like to use that term because nobody, in fact, is average – we are all unique) is generally not highly technical. All of these people use and need simple low-tech systems on a daily basis. A latch that holds a garden gate closed is an example of low tech – and there are a million more. These things will continue to be in demand, collapse or not.

“The Street Finds Its Own Uses For Things” – William Gibson

Here’s a list of skills that will be extremely valuable post-collapse. Which of these best suits your abilities and disposition?

This is list is not exhaustive. Can you think of others?

The First 9 Things To Do When The SHTF

10 Of The Best Herbal Remedies You Could Possibly Learn About