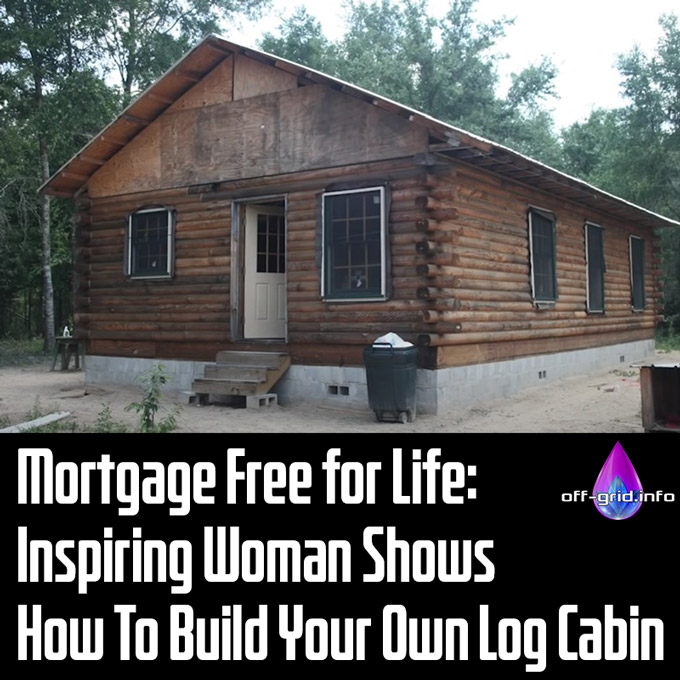 Mortgage Free For Life: Inspiring Woman Shows How To Build Your Own Log Cabin. Photo – http://www.youtube.com/watch?v=XLIWwLHvdGk

Here’s an awesome video diary of a lady who built her own log cabin using a “log cabin kit”. Let’s presume that she purchased the land first – however the monetary savings associated with this kind of build can be big if you are prepared to do much of the work yourself (and if you can handle “roughing it” for perhaps a year while the work is being done!)

This is an inspiring video because it demonstrates that what might seem like a daunting task is actually achievable. It does seem, though, that she either had expert assistance or that “this wasn’t her first rodeo”. For example, her technique of adding “blocking” in between the floor joists for extra strength is a known technique from the building trade – not something a first timer would necessarily know.

There are several further things that were not covered by this video that are worth mentioning: For all those thinking you will just “give it a go” – it’s a big mistake to assume that you can just buy a piece of land and start building. It’s good that she is encouraging people not to be afraid of building their own home, but it needs to be said that there really are a lot of things that can go wrong if you simply don’t know what you are getting yourself into. Here are some:

Permit: It’s very likely that (depending on your structure and its intended use) you will need a permit. This will itself require an architectural plan and the costs associated with this stage of the development can be considerable and should not be overlooked. Permits are important not only from the point of view that you might need to tear the entire place down if you get caught later, but because they are there to protect your safety. If anyone could build anything without a permit, we would have an awful lot of dangerous dwellings built by people who either did not know what they were doing or who were trying to do things “on the cheap”. This is one of the reasons why “tiny” house builders use a trailer bed – it means the house ultimately qualifies as an RV rather than a permanent structure, potentially bypassing building restrictions. You will still absolutely need to check what’s permissible in your area though, and it varies from place to place.

Zoning: If you are looking at land for sale, it needs to be determined that it is even zoned for you to be able to build on! Building is prohibited in some areas. The existing zoning should be examined and it should be verified that your intended use falls within the zoning rules. In some instances you may be able to apply for amendments to zoning but this is a topic in and of itself.

Perc Test: The site needs to have passed a perc test in order to determine the suitability for a septic system before a house can even be built! There should be certification that the local building department has already approved the site; otherwise a perc test will in general be required – and without one, you may not be able to build. The local planning office should have the answers to these questions.

Soil Testing: It should also be ascertained that there is no special problem such as buried toxic waste, filled land, organic soils such as peat or solid ledge (a problem if you want a basement), or a site with extreme water problems. While these things are uncommon, they can happen.

Site grading and drainage: There’s yet another step that needs to be addressed before you commence with the foundation: The site. It needs to be graded correctly and building codes vary in different States / Countries. For example, the slope around the house should run off gently (the exact amount in any given area is stated in the building codes) so as to prevent pooling of water at the foundations. You may also need to install French Drain or similar in order to channel away water during and after heavy rainfall and prevent waterlogging of the ground under the foundations, which may cause subsidence.

In summary – yes, you can build your own dream home – if you know what you are doing. If you don’t, it could become a nightmare. Think carefully before you act, don’t get in over your head financially due to unforeseen costs, and get expert guidance.

One thought on “Mortgage Free For Life: Inspiring Woman Shows How To Build Your Own Log Cabin”