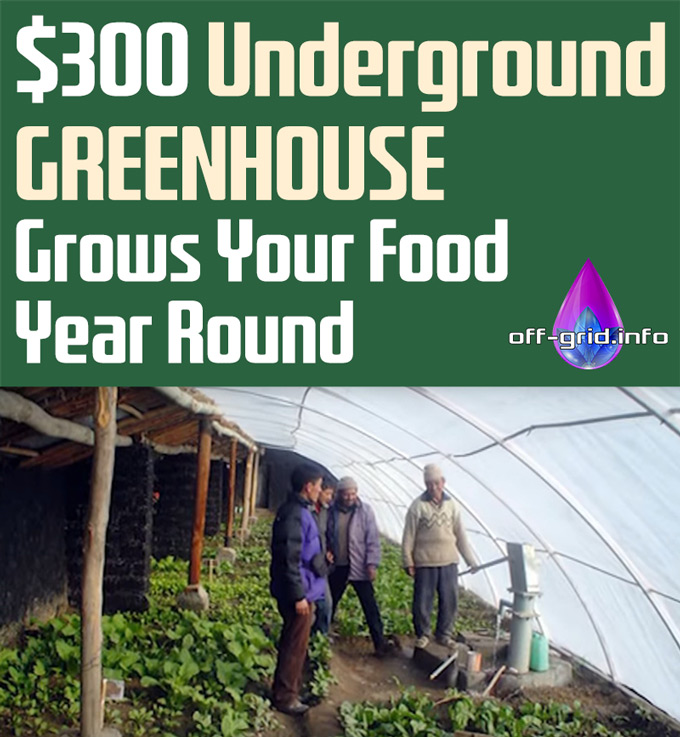 Due to the decreasing amount of space to grow healthy organic food, gardeners or growers are always looking for other ways to cultivate their crops. Gardening enthusiasts want to grow more and higher quality crops without depleting their savings. One of the methods they can use is the underground greenhouse, which can be constructed within a variety of geographic and climatic conditions.

Those who live in colder climates could build an underground or pit greenhouse, also known as a walpini, which is a more inexpensive and effective alternative to the glass greenhouse. Walpini is an Aymara Indian word which means “place of warmth.” The walpini was developed in the 1980s in South America for cold mountainous regions. This method is ideal for growers who want to extend the growing season – possibly all year round, even in cold climates.

Walpini is an innovative idea for off the grid living. It is a cheaper way to grow your own food and only costs $300 in building materials.

There are several advantages of an underground greenhouse. You lose less warmth in walpini compared to a traditional greenhouse. According to one walpini owner, his greenhouse keeps steady warmer temperatures when it is 10-degrees outside. A Walpini greenhouse does not take up as much visual space on the landscape. You can also use a walpini greenhouse as an alternative place for keeping some livestock. The walpini is especially beneficial for cold-sensitive livestock.

A typical walpini greenhouse is built 3 to 5 feet underground. Its design allows for the collection and storage of daytime solar radiation. A plastic sheeting covers the greenhouse, with the longest area of the greenhouse facing the winter sun. If you live in the Southern Hemisphere, the longest area of the walpini would face the north, and vice versa for those in the Northern Hemisphere.

This type of greenhouse has been proven effective and resilient in western China. Walpini greenhouses have helped farmers increase their yield and revolutionized the surrounding economy there.

Other countries that adopted the partially subterranean greenhouse method include Japan, Russia, South Korea, and the U.S. Farmers in these locations incorporated some kind of runoff system and built the walpini on a hill to deal with times of heavy rainfall.

When constructing a walpini, it is vital to consider its placement. There should be improper water drainage to prevent water penetration of molds which can lead to mold, causing damage to the crops.
Your walpini must have enough space to grow your plants. There should also be a small area to walk into the greenhouse. The ideal size for an underground greenhouse is 8 x 12 feet.

The underground greenhouse method is cheaper than aquaponics but requires more effort than urban homesteading. But its best selling points are its viability, affordability, and sustainability.

How To Use A Greenhouse To Heat Your House (Genius)