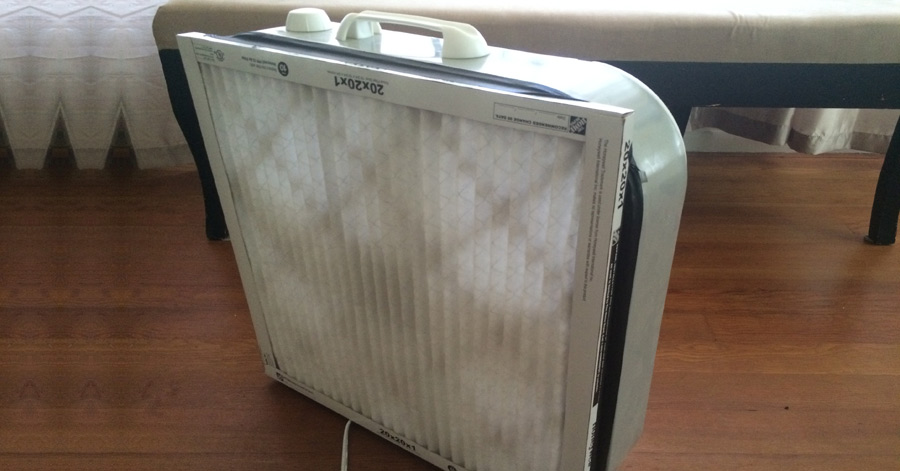 Check out this awesome “low tech” air purifier that is SUPER easy to make, ultra portable and will save you a ton of money… as well as possibly doing a better job of removing particles from the air than its super-expensive cousins.

I have extreme sensitivity to dust – so last year I purchased one of the “brand” HEPA air purifiers. These are expensive… the one I bought was around $600! But very much needed and if you have ever had choking attacks brought on by dirty air, you will know what I mean. HEPA (High Efficiency Particulate Arrestance) filters do the job and do it very well.

Now I don’t want to discredit the manufacturers of these well-made devices and it’s well established that they work – however my curiosity got the better of me and I took a look inside.

I guess I was expecting some kind of “secret sauce” tech that made it so expensive. But no. It’s just a fan and a filter – in a pretty metal case with blue lights on it and a 4-way fan speed selector. That’s it.

Now if you need your air purifier to look like a modern home appliance, or in a critical application where it needs to be rated and tested, then buy the real thing. However if you need it for a workshop, art studio, home remodel, Burning Man RV, or simply don’t mind too much about appearances so long as it gets the job done (i.e. like most people) then you’ll love this DIY low-tech version that cost me only about $35 for the parts, plus a few bucks for a roll of tape that you may already have.

1 of – 20″x20″ HEPA filter. Around $15 from Home Depot or cheaper on Amazon… I just found a pack of 6 MERV 11 rated filters on Amazon (currently $46.50, $7.75 each!) here. Also this is way cheaper than filter replacements for the brand air purifiers. Like printers, they get you on the cost of the consumables and some brand air purifiers can have replacement filter costs of $75 or more!

1 of – roll of “Gaffer Tape” (Amazon link). You could use duck tape but I wouldn’t, personally. The gaffer type (cloth backed) is far superior; strips can be torn by hand and it leaves much less residue when removed.

1) Important note – the filter attaches to the back of the fan. Be sure that the air flow direction arrow is pointing toward the fan and the fan is pulling on the filter, rather than pushing on it. The fan should be sucking air through the filter.

2) Tape around the edge, sticking the two items together and creating a seal so that air doesn’t escape. Another money-saving tip: You can tear gaffer tape lengthways to make thinner strips, as I did in the photo – in order to get twice as much taping for your money!

3) Important note: Never remove the protective cage around the fan blades (or allow anything to poke through it). That cage is there to protect you from serious injury. And don’t allow kids to play with the fan – it is not a toy and they can be dangerous if misused.

I found that my low-tech purifier (subjectively) cleans the air better and faster than the expensive one. It stands to reason – the fan is bigger and more powerful, so it moves more air. I believe a big part of the expense of the brand filters is making something that is “quiet enough for the bedroom” for allergy sufferers. However in many scenarios, you just want clean air and don’t care about a bit of noise. The low tech air purifier is also super portable, you can just pick it up and put it in the room you are in. Superb if you are doing any sort of remodeling – which is ALWAYS a dust nightmare!

I used these filters during California wildfires when we had major smoke in the area, and also during remodeling when sanding a wooden floor. Great results. Seeing how much of the sanding dust ended up in the filter (lots) gives a good idea of what is getting removed from the air.

Depending on the grade of filter square you buy (the best ones are a little more expensive), you can remove dust, lint, pollen, mold and even smoke from the air. Keep an eye on your filter square and when it gets filthy, simply replace the filter.

How To Remove VOCs (volatile organic compounds) from air:

Note that the above is a HEPA-only setup and will not remove VOCs (volatile organic compounds) such as formaldehyde or other solvent fumes. For those you will need a gas phase purifier, typically activated charcoal. A simple “upgrade” option here is to get a 20×20 box fan filter that is carbon impregnated such as this one on Amazon. Otherwise, you would need to look into a separate carbon filter stage – and then you are into the whole world of HVAC systems; which have some amazing solutions for dealing with high volume air cleaning – but these are often big, loud and more expensive.

One thing to note about box fans – they are somewhat loud. A name-brand $500 air purifier typically has a “super quiet” setting so that it can provide round-the-clock air purification in spaces such as a bedroom that requires low noise.

Turns out that you can get a fan speed controller to “dial down” the speed of your fan and thus make it quieter. I just ordered this one on Amazon for $15. That brings my total costs for this project to around $60 – which is still $540 LESS than the fancy purifier – and now mine has activated carbon VOC removal and infinite speed control, which the expensive one didn’t…

Sometimes these inline speed controllers may introduce some “hum” into the system, depending on the fan speed. You might still not be able to get a setup ideally suited to bedrooms. I just leave my air purifiers in living areas and assume that the clean air is going to drift around the house. Air typically rises throughout a building due to convection, so it would make logical sense to put air purifiers downstairs, given the option.

Never remove the fan cover – the part that gets in between you and the blades. For this project you don’t need to dismantle the fan in any way. The “cage” around the fan is there for a very good reason! Leave it there. As with most life hack type projects, this one should be done with adult supervision. Be careful not to get anything inside the fan box where it could get caught in the blades and of course, don’t work on this while the fan is plugged in or switched on! Never have loose clothing, dangling cords such as those from a hoodie, or long hair near anything that spins at high speed.

Note also that if you are doing work involving VOCs, such as painting with solvent based paints, you should still follow safety procedures such as the correct mask and ventilation and not rely on a VOC filter alone.

DIY Tiny House With The Most INCREDIBLE Interior Design