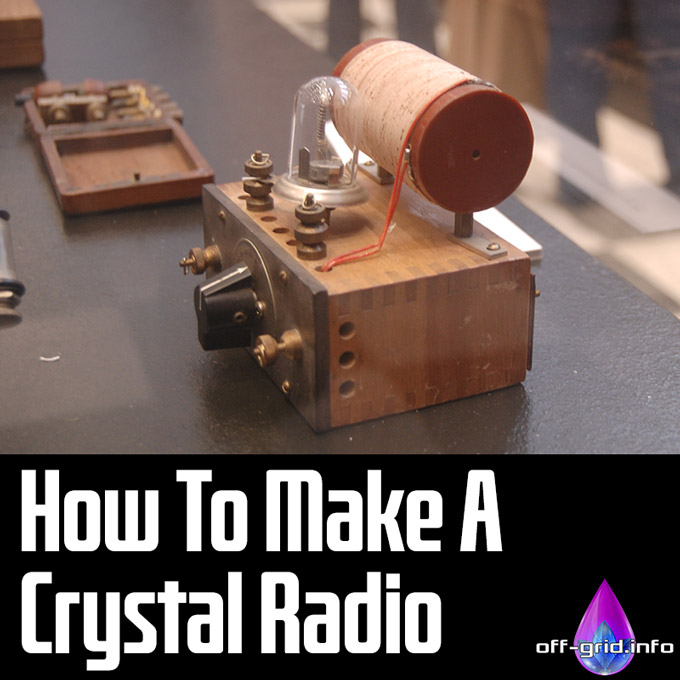 A crystal radio is a radio that only uses the energy of the radio waves themselves, picked up by the antenna, to generate the sound heard in the head phones. It needs no external power source! It gets its name from its vital component; a crystalline semiconductor component that detects the radio waves.

Crystal radios can be constructed with inexpensive materials, perhaps even already ‘around the house’ and are regarded as the most simple form of radio receiver. This video shows how to make a crystal radio made almost entirely from found items except for the diode and the earpiece.

Did you know that crystal radios were the first wireless devices? At the beginning of the 20th century, an American researcher with the splendid name of Greenleaf Whittier Pickard, discovered that certain natural crystalline minerals could be used to pick up radio signals. The crystal was fixed into a brass holder and the radio operator touched a very fine wire, known as a cat’s whisker, to various points on the crystal’s surface in order to detect the strongest signal.

Crystal radios are distinct from ordinary radios as they don’t have a source of electricity power such as a battery or the mains power to amplify the weak radio signal to make it louder. In other words, there are no batteries, no transistors or amplifiers of any kind and the sounds are produced solely by the energy of the filtered radio wave! The downside of crystal radios is that the sounds generated from them are less powerful and they have a limited range of operation, only being able to pick up transmissions within that range. They typically receive AM signals although FM and even shortwave sets may be possible.

Crystal radios are considered a survival tool. If a grid down situation occurs or in a very remote area, there will be no electricity supply, so building a radio that doesn’t rely on batteries or power could give you an advantage. Surely, there will be some people who will use the airwaves to keep people in the loop and may be able to offer help.

11 Simple Self-defense Tips That Could Save Your Life