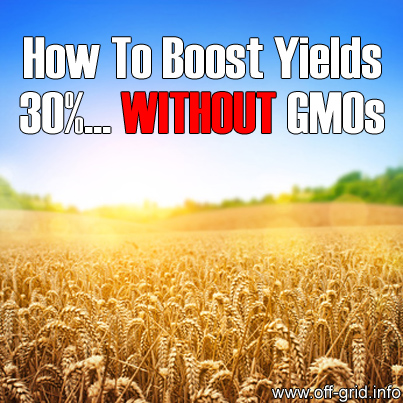 How To Boost Yields 30%… Without GMOs photo – © James Thew – Fotolia.com (under license)

We found an astonishing article with tremendous news for improving yields of wheat crops by an amazing 30% – without resorting to genetic modification! The link is after our commentary and additional resources. The article gives an informative account of this exciting new development and some very convincing reasons to avoid GM food /seeds. It’s great to see that there are some scientists still working in this field – they have made a fantastic breakthrough using nothing more fancy than the age old technique of cross-breeding plants to create new varieties with resistance to drought and disease. The first trials have shown 30% better yields already!

The “old school” plant breeding methods of simple selective breeding since ancient days, led to the wonderful vegetable and fruit varieties that (until the 20th century) were the staple of all.

Although the population of the world is growing, it is erroneous to assume that we just need “more food”. There is actually a tremendous surplus of food, globally – with political and economic problems being cited as a greater cause of starvation.
GM crops have been promoted with increased yields as their main goal but there is more to it than meets the eye: 1) The yield increase is questionable – they may not actually be increasing yields at all. (source – “Failure To Yield”; full study by the Union of Concerned Scientists). 2) The companies that develop them are taking risks that are not only dangerous but could prove completely unnecessary if this new research continues to be successful. The grass roots support for using more natural methods and avoiding genetic modification is already very strong – now there is real hope for it to grow further.

Even greater consideration should be given to permaculture “closed loop” methods of agriculture, which can push yields per acre WAY higher – at least tenfold. Typical crop yields per acre might be 10,000 pounds of food – although this is of course an average, with some crops being higher, some lower. Some growers are claiming over 100,000 pounds of food per acre with permaculture / aquaponics systems – which completely blows any GMO crops out of the water. If you study permaculture, it makes total sense why this would be the case – amazing example here: http://www.youtube.com/watch?v=jV9CCxdkOng

Related: Video: How To Grow An Organic Vegetable Garden

GM crops are becoming more widely grown in the US, with Monsanto taking the lead. However in the EU it is a different story – despite backing by the UK Environment Secretary, Science Minister and chief scientist, there have been sufficient protests to let Monsanto know that they are not welcome: “Frankenstein food firm quits Europe after public suspicion.

As well as keeping up the opposition to agriculture using methods that ignore long-term environmental effects, it’s helpful to see how using natural methods will keep the world safer and in many cases can provide all that we need. Most importantly, biodiversity and ecological balance need to take precedence as it is clear that human life is improved when nature is respected and we work to stay in touch with natural law.

There is an ongoing debate about whether crops grown with organic methods are more nourishing than others – but much of this has ignored the amazing work done in the 20th century on the science of “living soil”. For example, lichens were shown by old studies to chelate minerals from the rocks, leading to a higher bioavailable mineral content within the food. Modern chemical-based methods “kill” the soil, instead of viewing it as a “life form”. Net result? Bland tasting food with paler color and less nutritional content. Note that you won’t often hear this discussed. The research was ignored / suppressed but can be seen in Chapter 10 of the amazing Secrets Of The Soil (Amazon link).

One of the biggest factors for maintaining high nutrient levels in your food is to eat as fresh as possible – as it is thought that the longer that food is stored, the more the nutrient levels decrease. Growing your own or buying local produce where possible, as well as reducing cooking times where possible, will thus allow the greatest benefit.

Ok, here’s the link to the full report: http://www.permaculture.co.uk/articles/yields-wheat-cross-bred-wild-grass-could-be-boosted-30

Thoughts? Comments? Please let us know either here or on the Off Grid Facebook page!

How To Design Your Ideal Homestead