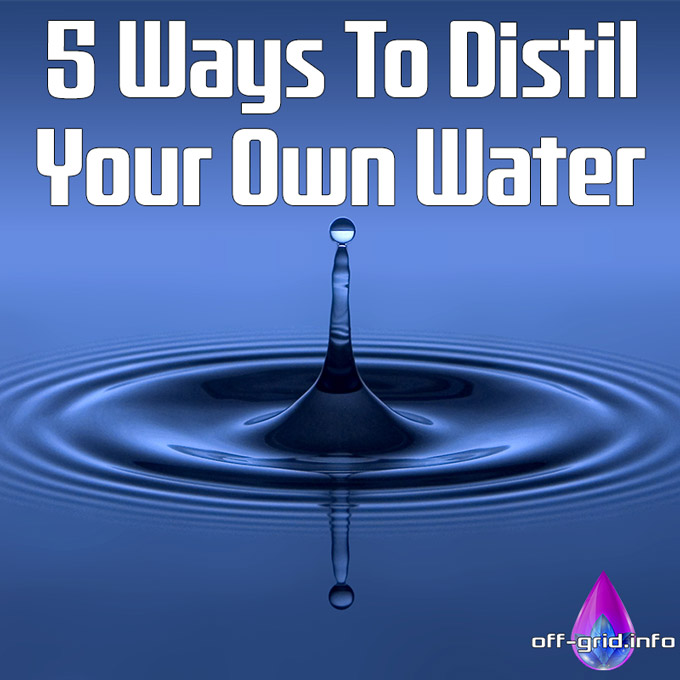 5 Ways To Distil Your Own Water. Photo – Adobe Stock (under license)

We found a great tutorial on water distillation. The link is after our commentary and important additional tips.

Water is essential for all life forms. We need it to keep us hydrated and it also helps in flushing out toxins from our body. There are so many benefits that come with drinking water. It contains zero calories – so it’s a perfect beverage to drink if you’re planning to lose weight!

Distilled water is water in its purest form. Distillation is a process of removing impurities by first boiling the water and then condensing the steam into a clean container. This is sometimes recommended for people who are sick, but it’s typically not recommended for everyday use because our bodies also need minerals – and the minerals are removed by distillation.

This brings up an interesting and much-debated topic: Is drinking distilled water healthy? I have pored over innumerable documents (such as this one) in an attempt to get the best answer to this, and to be honest, the jury is still out. It is one of those “no simple answer” topics that is argued over endlessly, it seems.

Benefits of distilled water are that the water really is pure. This is a GREAT benefit – and if the containers were properly cleaned, then this means no microorganisms, no parasites, no fluoride, no pesticides and none of the other nasty chemicals that are now so often found in tap water – such as chlorophenols (not good stuff – source: http://www.who.int/water_sanitation_health/dwq/chemicals/chlorophenols.pdf)

The main downside of drinking distilled water, which is not always discussed, appears to be that distilled water is out of balance with our bodies natural concentration of salts. Due to osmotic pressure, it (apparently) can cause destruction of cells. It is also considered that too low a concentration of minerals in our water might lead to demineralization and health problems associated with it.

One may hear nutritionists talk of isotonic beverages. These have a concentration of salts that matches that of the body, which is reported to lead to maximum hydration.

One suggestion I have read is that a great way to prepare the “perfect water” is to distil it and then add just a small pinch of Himalayan pink salt, which is considered one of the best, purest and optimally mineralized salts in the world. Not enough to make the water taste salty, but enough to add some minerals into the mix.

I think there is much research still to be done in this area. What about adding bioavailable minerals to the distilled water? Some have claimed that rock-based minerals are not ideal for the body as they cannot be absorbed correctly in that form.

Here are some further tips to avoid getting waterborne diseases:

1. If you’re travelling to an unfamiliar place, buy bottled water only.

2. Don’t drink untreated water from a stream, lake, river or any body of fresh water. Boil the water for at least five minutes so that it will be safe for drinking. Flowing streams are much safer than stagnant water but don’t risk drinking it without boiling. One should also be very wary of pollution as so many waterways, downstream from agriculture, industry or other human civilization, are polluted.

3. Be wary of food served by street vendors. You can’t be certain if they used clean water to wash their foods or utensils. If you can’t avoid it or if you are super hungry, make sure that the food is piping hot, not cold. It is well known that it is the salad, washed in local water, can often make travelers seriously ill.

4. Practice good hygiene. Wash your hands before and after going to the toilet. Disinfect your cutlery, chopping boards and other items that can come in contact with food and water. You can even sterilize the forks and spoons and other commonly touched items such as door handles if you have someone in your house who is sick.

5. Eat at reputable restaurants. If you’re traveling, search for a list of popular places that people go to. You can also look for restaurants that have a sanitation permit. If it’s a legit restaurant, they won’t sacrifice their reputation for something as dangerous as unsanitary water.

6. Sometimes, tap water isn’t safe for drinking, that’s why it’s best for you to have it purified or distilled.

Here’s the link to the full tutorial: http://preparedforthat.com/diy-how-to-distill-water-at-home/ (via web archive)

6 thoughts on “5 Ways To Distil Your Own Water”