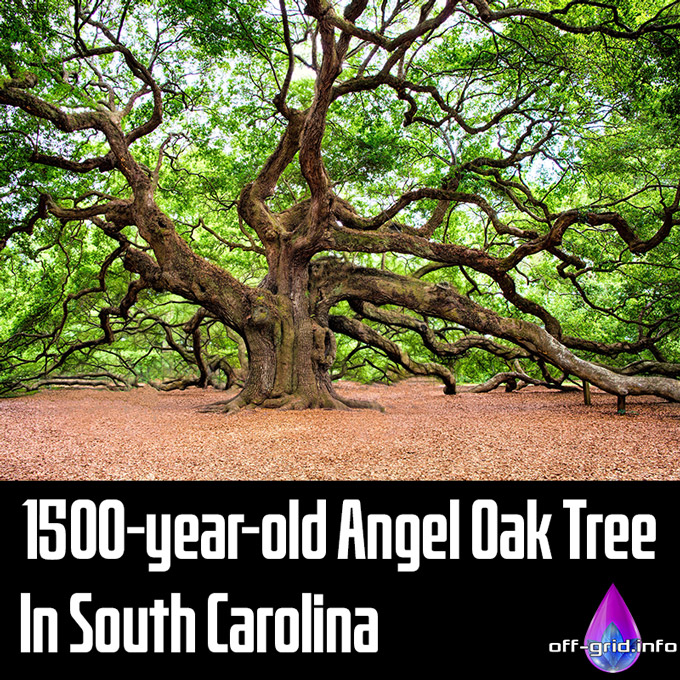 If you are visiting South Carolina, it is a must to see The Tree, which is a fairy-talesque live oak tree located on Johns Island, near Charleston. Also known as the Angel Oak Tree, The Tree is believed to be to be one of the oldest still-living trees east of the Mississippi River.

With an estimated age of 400-500 years, the Angel Oak Tree stands 66.5 feet tall, has a circumference of 28 feet, and has a shade canopy that covers an impressive 17,200 square feet. The distance between its tip and the longest branch is 187 feet. Some contend that the behemoth is 1,500 years old, but others argue that more conservative estimates are more accurate.

The Angel Oak belongs to a species called live oak or Virginia live oak, native to the lowland country of coastal Carolina. It grows on sandy soils of low coastal areas as well as in dry and sandy woods or moist rich woods. Live oaks grow more outward than upward, but the Angel Tree has done both due to its age.

If The Tree’s estimated 1,500-year age is true, it probably has lived through so many significant events in world history. When the ancient oak was only a sapling, there were only 208 million people on Earth and the first Anglo-Saxon poetry possibly had documented beauty of Oak trees. When Columbus discovered America, the mighty oak was about 1,000 years old.

The oak derived its name not from an “actual angel” but from the Angel family. Justus Angel and his wife, Martha Waight Tucker Angel, were the original owners of the estate. The land was part of Abraham Waight’s 1717 land grant. Now, the city of Charleston owns the magnificent oak and the surrounding park after purchasing the property in 1991. The oak was the 210th tree to be registered with the Live Oak Society. Other recognitions include a Millennium Tree award in 2000 and as the 2004 South Carolina Heritage Tree honor.

Stories have also endured about the angels who appear in and around the oaks sweeping branches. These angels are said to be ghosts of former slaves whose numbers in South Carolina peaked by 1720, when 65% of the population were enslaved African-Americans.

Angel Oak has survived through several disasters including earthquakes, hurricanes, and floods. In 1989, it was severely damaged by Hurricane Hugo but had since recovered.

The stately oak was also threatened by human interference. In 2012, a developer proposed building a 500-unit apartment complex that would be 150 meters away from Angel Oak. Concerned groups including Save the Angel Oak and the Coastal Conservation League, challenged the proposed development claiming the constructions effect on available groundwater and nutrients. They also argued the project would affect the nearby forests whose root systems are related to the Angel Tree.

Although the Angel Tree is a sturdy tree, it is weakening with age, so a system of cabling and poles has now been installed to support the tree.

How To Make An Oil Lamp From A Light Bulb

Which Battery Lasts The Longest?